All You Need to Know About JOJO Tarot Cards

JoJo Tarot Cards are derived from a Japanese men’s cartoon series based on the writing of Hirohiko Araki. JoJo came out as a serial from 1987 to 2004. It is a “Shonen” meaning Boy’s cartoon series in English. JoJo’s genre spans around action, adventure, thriller, comedy, supernatural elements and Horror as well as mystery. The series became known mostly for it’s Stand phenomenon.

Stand is an identity generated by the Stand owner using psychic powers and this concept helped in the shaping of JoJo Tarot Card Reading. This is a hovering object and prefers to be near the Stand user. It possesses supernatural capabilities. It can primarily function as good or bad wielding elemental powers and existence beyond the control of human beings.

It was at a point the best selling cartoon series and has sold over 100 million print copies. JoJo Tarot Cards is based on the second animated adaptation of the cartoon’s third part, the Stardust Crusaders. The series of 48 episodes was aired in two sequences, 24 episodes in each part.

Learn more about How to Read Tarot Like a Professional

The episodes were aired with Japanese and English subtitles and the second part was known as “Battle in Egypt.” JoJo Tarot Cards are the Major Arcana Tarot Cards majorly. 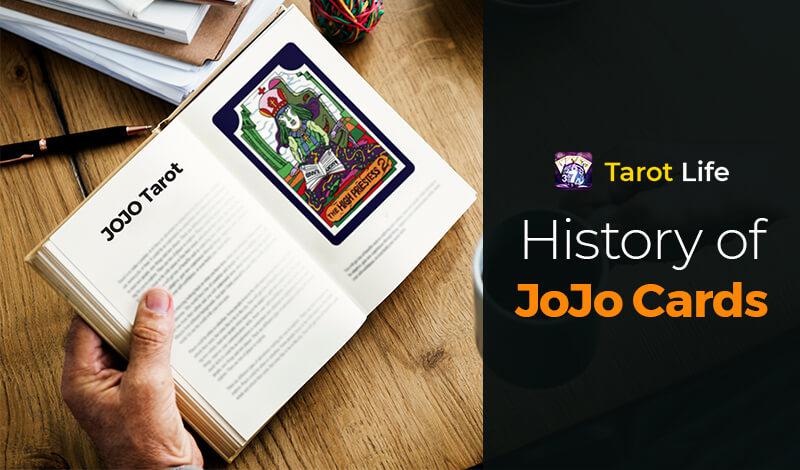 JoJo Tarot Cards is the series that has Jotaro Kujo as the hero. Alongwith his comrades, his family was involved in the development of mysterious powers called “Stands.” Jotaro and his grandfather with the allies travel to Egypt in search of the Evil vampire, Dio Brando. They do this to save Holly, Jataro’s mother and the immortal Dio tries to protect himself by involving other such assassins and Stands.

The Stands had a different identity and name in the series and the characters in the JoJo Tarot Cards are identified by the pictures each portray. Jotaro Kujo’s Stand was known as Star Platinum. Joseph Joester’s Stand was known as Hermit Purple and so on and so forth. Jotaro, on finding his Stand appear one day locks himself in the cell and refuses to come out, believing to have been consumed by some Evil spirit.

Holly, his mother and Joseph, his grandfather coax him to believe the theory of Stands and that such a phenomena occurs for each of their generations. Joseph informs Jotaro of their 100 year old enemy Dio. Grandpa Joseph uses a picture of Dio to confirm that this brand of vampires have a star shaped mark on their necks.

A fly in the picture behind Dio confirms, Dio was in Egypt when the photograph was being taken as the fly was identified to be a native of Egypt alone. Holly when one day was found in an unconscious state in the kitchen with the rose vine bush near her identified to be her Stand. It was realised then, that Holly was not able to tolerate the power of the Standdue to the curse of Dio. 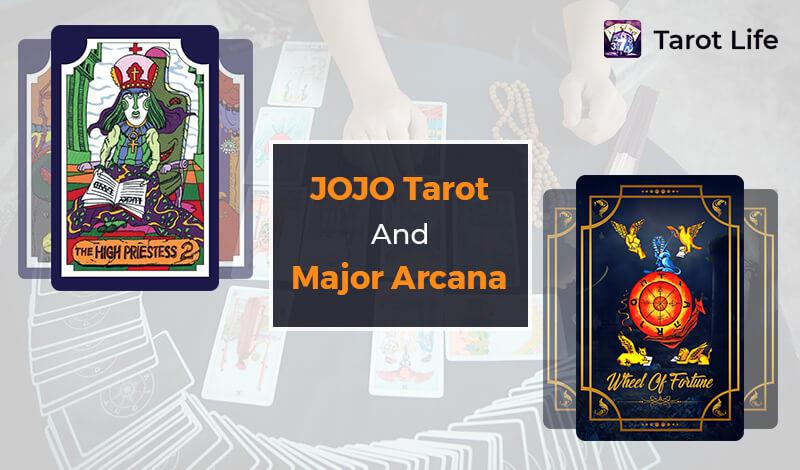 Card 4: The Emperor of JoJo Tarot Cards is the Hol Horse and it can serve only as a mediator force and resembles a gun. It portrays order and control, like the gun in the hand of a mediator. Since it is portrayed as a symbol of Force and Power, thus it is compared to the Emperor of Tarot Cards.

Card 5: The Hierophant of JoJo Tarot Cards has a huge number of abilities, for combat and scouting. It has relatively weak hand-on-hand combat abilities. This Tarot Card is a bridge between Heaven and Earth, and long range capabilities of the Stand Hierophant Green is why it is compared to the Hierophant of the Tarot cards.

Card 6: The Lovers of JoJo Tarot Cards is very small, enabling it to infiltrate the human body unnoticed. Being a robotic humanoid form, it is a combination of a fly, flea and robot. The Lovers Tarot Card symbolizes the bond between two people like the link portrayed by the JoJo Tarot Cards between the fly and the human.

Card 7: The Chariot of JoJo Tarot Cards is the Silver Chariot and is a powerful, battle-dedicated close-range Stand that primarily fights with a rapier. This Silver Chariot card is similar to the Chariot Tarot Card symbolising invasion and victory.

Card 8: Strength of JoJo Tarot Cards can bind itself to a small boat and can transform into a gigantic freighter. It represents Strength Tarot Card. The card can challenge you to a fight, the Stand is shown to have a very strong will power and the hidden potentials of a human being.

Card 9: Wheel of Fortune of JoJo Tarot Cards can enhance the appearance and capabilities of a vehicle it uses as a catalyst. It endorses the cars also with the ability to clean themselves on their own. I think you know how it might be similar to the Wheel of Fortune Card.

Card 10: Justice of JoJo Tarot Cards has a quasi-invulnerability as a fog Stand and it possesses the ability to control anyone’s body through an open wound. The card of Justice symbolises results and consequences and this Stand is closely similar to the functional characteristics of the Justice Tarot Card.

Card 11: The Hanged Man of JoJo Tarot Cards attacks from the inside of mirrors and is one of the most evasive powerful Stand. Hanged man tarot card is perhaps depicted by this Stand as it has to reflect and stay still until its victim appears on a reflective surface.

Card 12: Death Thirteen of JoJo Tarot Cards is capable of attacking a person once asleep, thus capable of controlling only dreams. It horrifies people, mocks their existence and belittles them, thus resembling the concept of physical death portrayed by Tarot Cards to a large extent.

Card 14: Temperance of JoJo Tarot Cards has the ability to absorb organic matter to grow stronger and sturdier. It has no personality and its ability to consume flesh is an opposing action to the original card.

Card 15: Ebony Devil’s power comes alive when Devo is hit by his enemies. Ebony Devil is symbolising confusion bringing misfortune to its bearer.

Card 16: The Tower of JoJo Tarot Cards is fast and extremely nimble though small and extremely fragile. Since it causes accidents deliberately interrupting a journey mid way using unexpected and chaotic processes like the accidents, it is compared to the Tarot of The Tower.

Card 18: The Dark Blue Moon of JoJo Tarot Cards can scale as projectiles, its skills are more effective in aquatic environment. It depicts trouble, lies, betrayal and fear like the Moon Tarot Card.

Card 19: The Sun of JoJo Tarot Cards can emit light and heat at lethal levels over a large area. It is compared to the physical heat and energy rather than the optimistic rays of hope portrayed by the Sun Tarot Card.

Card 20: Judgement of JoJo Tarot Cards has above average strength and speed. The Stand is consistent with the Tarot card in reverse order, thus creating doubt and deceit in people’ minds affecting their decision making capabilities.

Card 21: The World of JoJo Tarot Cards requires to be at a closer distance to effectively combat its enemies and its overwhelming strength and near unstoppable control over time, makes it the most dangerous of all Stands. The card is a symbol of tectonic chance, it is the beginning of a new world order. Even before it appeared, the rumours of its power was enough to create fear in its followers.

Tarot is the depiction of true symbolic forms and patterns. It is the most oblique wisdom present on Earth yet it is one of the most effective ways of channelisation of knowledge. Jojo Tarot Cards are one of the most experimental version of Major Arcana Tarot cards available around you. You can also draw a daily Tarot using the JoJo Tarot Cards. The JoJo Tarot Cards impart wisdom in a skewed pattern, even more oblique than the true format. Tarot Cards of JoJo is a superior form of expression yet very diverse and all the more difficult to understand. We have tried to summarize the various aspects of Tarot Cards of JoJo in one place for you to refer.